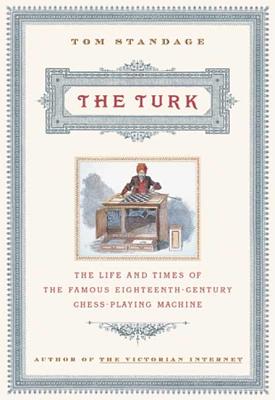 The Turk: The Life and Times of the Famous Eighteenth-Century Chess-Playing Machine

On an autumn day in 1769, a Hungarian nobleman named Wolfgang von Kempelen attended a conjuring show at the court of Maria Theresa, empress of Austria-Hungary. So unimpressed was Kempelen by the performance that he declared he could do better himself. Maria Theresa held him to his word and gave him six months to prepare a show of his own. Kempelen did not disappoint; he returned to the court the following spring with a mechanical man, fashioned from wood, powered by clockwork, dressed in a stylish Turkish costume--and capable of playing chess.

The Turk, as this contraption became known, was an instant success, and Tom Standage's book chronicles its illustrious career in Europe and America over the next eighty five years. Associated over time with a host of historical figures, including Benjamin Franklin, Catherine the Great, Napoleon Bonaparte, Charles Babbage, and Edgar Allan Poe, Kempelen's creation unwittingly also helped to inspire the development of the power loom, the computer, and the detective story. Everywhere it went, the Turk baffled spectators and provoked frenzied speculation about whether a machine could really think. Many rival theories were published, but they served only to undermine each other.

Part historical detective story, part biography, The Turk relates the saga of the machine's remarkable and checkered career against the backdrop of the industrial revolution, as mechanical technology opened up dramatic new possibilities and the relationship between people and machines was being redefined. Today, in the midst of the computer age, it has assumed a new significance, as scientists and philosophers continue to debate the possibility of machine intelligence. To modern eyes, the Turk now seems to have been a surprisingly farsighted invention, and its saga is a colorful and important part of the history of technology.

Title: The Turk: The Life and Times of the Famous Eighteenth-Century Chess-Playing Machine

The Turk: The Life and Times of the Famous Eighteenth-Century Chess-Playing Machine