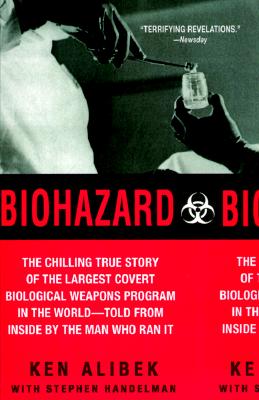 Biohazard: The Chilling True Story of the Largest Covert Biological Weapons Program in the World--Told from Inside by the Man Who Ran It

Anthrax. Smallpox. Incurable and horrifying Ebola-related fevers. For two decades, while a fearful world prepared for nuclear winter, an elite team of Russian bioweaponeers began to till a new killing field: a bleak tract sown with powerful seeds of mass destruction--by doctors who had committed themselves to creating a biological Armageddon. Biohazard is the never-before-told story of Russia's darkest, deadliest, and most closely guarded Cold War secret.

No one knows more about Russia's astounding experiments with biowarfare than Ken Alibek. Now the mastermind behind Russia's germ warfare effort reveals two decades of shocking breakthroughs . . . how Moscow's leading scientists actually reengineered hazardous microbes to make them even more virulent . . . the secrets behind the discovery of an invisible, untraceable new class of biological agents just right for use in political assassinations . . . the startling story behind Russia's attempt to turn a sample of the AIDS virus into the ultimate bioweapon. And in a chilling work of real-world intrigue, Biohazard offers us all a rare glimpse into a shadowy scientific underworld where doctors manufacture mass destruction, where witnesses to errors are silenced forever, and where ground zero is closer than we ever dared believe. Praise for Biohazard

"Remarkable . . . terrifying revelations . . . Ken Alibek's] overall message is ignored at great national peril."--Newsday "Read and be amazed. . . . An important and fascinating look into a terrifying world of which we were blissfully unaware."--Robin Cook, author of Contagion

Title: Biohazard: The Chilling True Story of the Largest Covert Biological Weapons Program in the World--Told from Inside by the Man Who Ran It

Biohazard: The Chilling True Story of the Largest Covert Biological Weapons Program in the World--Told from Inside by the Man Who Ran It