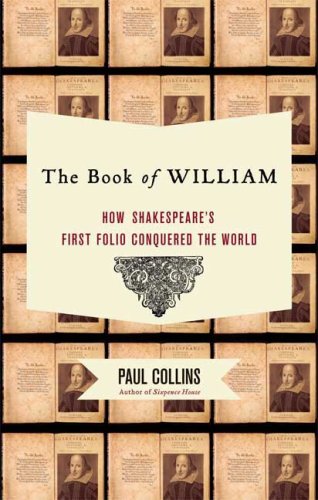 The Book of William: How Shakespeare's First Folio Conquered the World

One book above all others has transfixed connoisseurs for four centuries--a book sold for shillings in the streets of London, whisked to Manhattan for millions, and stored deep within the vaults of Tokyo. The book: William Shakespeare's First Folio of 1623. Paul Collins, lover of odd books and author of the national bestseller Sixpence House, takes up the strange quest for this white whale of precious books.

Broken down into five acts, each tied to a different location and century, The Book of William's travelogue follows the trail of the Folio's curious rise: a dizzying S otheby's auction on a pristine copy preserved since the seventeenth century, the Fleet Street machinations of the eighteenth century, the nineteenth century quests for lost Folios, obsessive acquisitions by twentieth century oilmen, and the high-tech hoards of twenty-first century Japan. Finally, Collins speculates on Shakespeare's cross-cultural future as Asian buyers enter their Folios into the electronic ether, and recounts the book's remarkable journey as it is found in attics, gets lost in oceans and fires, is bought and sold, and ultimately becomes immortal.

Title: The Book of William: How Shakespeare's First Folio Conquered the World

The Book of William: How Shakespeare's First Folio Conquered the World