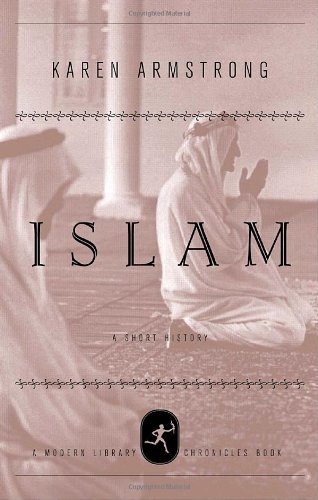 No religion in the modern world is as feared and misunderstood as Islam. It haunts the popular Western imagination as an extreme faith that promotes authoritarian government, female oppression, civil war, and terrorism. Karen Armstrong's short history offers a vital corrective to this narrow view. The distillation of years of thinking and writing about Islam, it demonstrates that the world's fastest-growing faith is a much richer and more complex phenomenon than its modern fundamentalist strain might suggest.
"Islam: A Short History" begins with the flight of Muhammad and his family from Medina in the seventh century and the subsequent founding of the first mosques. It recounts the origins of the split between Shii and Sunni Muslims, and the emergence of Sufi mysticism; the spread of Islam throughout North Africa, the Levant, and Asia; the shattering effect on the Muslim world of the Crusades; the flowering of imperial Islam in the fourteenth and fifteenth centuries into the world's greatest and most sophisticated power; and the origins and impact of revolutionary Islam. It concludes with an assessment of Islam today and its challenges.
With this brilliant book, Karen Armstrong issues a forceful challenge to those who hold the view that the West and Islam are civilizations set on a collision course. It is also a model of authority, elegance, and economy.