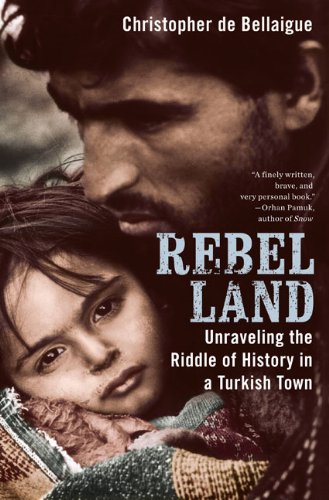 Rebel Land: Unraveling the Riddle of History in a Turkish Town

An esteemed journalist travels to Turkey to investigate the legacy of the Armenian genocide and the quest for Kurdish statehood.
In 2001, Christopher de Bellaigue, then the "Economist's" correspondent in Istanbul, wrote a piece about the history of Turkey for "The New York Review of Books." In it, he briefly discussed the killing and deportation of half a million Armenians in 1915. These massacres, he suggested, were best understood as part of the struggles that attended the end of the Ottoman empire.
After the story was published, the magazine was besieged with letters. This wasn't war, the correspondents said; it was genocide. And the death toll was not half a million but three times that many. De Bellaigue was mortified. How had he gotten it so wrong? He went back to Turkey, but found that the national archives had sealed all documents pertaining to those times. Undeterred and armed with a stack of contraband histories, he set out to the conflicted southeastern Turkish city of Varto to discover what had really happened.
There, de Bellaigue found a place in which the centuries-old conflict among Turks, Armenians, and Kurds was still very much alive. His government escort began their association by marching with him arm in arm through the town's shopping district to show his presence; the local police chief, sent by the central office in Ankara to keep an eye on the Kurds, was sure he was a spy. He found houses built from the ruins of old Armenian churches, young boys playing soccer with old skulls, and a cast of villagers who all seemed unwilling to talk.
What emerges is both an intellectual detective story and a reckoning with memory and identity that brings to life the basic conflicts of the Middle East: between statehood and religion, imperial borders and ethnic identity. Combining a deeply informed view of the area's history with the testimonials of the townspeople who slowly come to trust him, de Bellaigue unravels the enigma of the Turkish twentieth century, a time that contains the death of an empire, the founding of a nation, and the near extinction of a people. "Rebel Land" exposes the historical and emotional fault lines that lie behind many of today's headlines: about Turkey and its faltering bid for membership into the EU, about the Kurds and their bid for nationhood, and the Armenians' campaign for genocide recognition.

Title: Rebel Land: Unraveling the Riddle of History in a Turkish Town

Rebel Land: Unraveling the Riddle of History in a Turkish Town